Rabies: Misconceptions, Facts, & How to Keep Your Family Safe 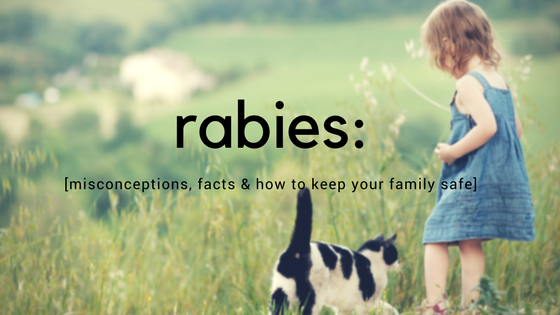 A few weeks ago there was a case of rabies in Norfolk, NE, where a rabies-infected cat came into contact with a human. Still more recently, someone encountered a rabies-infected bat in Lincoln, NE. Many people are still mystified by this disease, and it’s understandable! We learn to fear rabies and know to avoid animals foaming at the mouth, but most people don’t know much more than that, and there are a lot of misconceptions out there. I’d like to take this time to help sort out some facts and misunderstandings.

Rabies is a bullet-shaped virus found world-wide, affecting only mammals; it is a zoonotic disease, meaning it can spread from animals to humans. While all mammals have the potential to be infected, in some species it has only rarely ever been reported. For example, rabies has very rarely been reported in rodents (squirrels, guinea pigs, rats, etc.) and rabbits. Rabies in opossums is extremely unusual; this is thought to be due to their body temperature being lower than that of most other mammals, making it hard for the virus to survive. Bats, skunks, raccoons, foxes and coyotes are the wild animals most often found with rabies in the U.S. Each of these species has their own variant, or strain, but each variant can be transmitted to other mammals. In the Midwest, the skunk variant is the most prevalent.

How is rabies spread?

Rabies is primarily transmitted via saliva, so the most common way to contract the virus is through a bite wound from an infected animal, but it is also possible to contract the virus through a scratch from an infected animal. Contact with nervous system tissue (the brain, spinal cord) is another way the virus can be transmitted. Once the virus enters the body, it replicates in muscle cells, and gradually travels along nerves, making its way to the brain. During this time, the animal (or human) does not appear to be ill and is not necessarily contagious. This is called the incubation period, when the virus is multiplying, but the animal is not yet infective, contagious, to other animals. The incubation period for rabies can last weeks to months. Once the virus reaches the brain, it multiplies quickly, causes inflammation, and spreads to other body tissues, including the salivary glands. This is when the outward physical signs of rabies are seen. Unfortunately, the virus can reach the salivary glands, and thus be transmissible to another animals (via bite wound), several days prior to showing symptoms of the disease.

What are the symptoms of rabies?

When people think of symptoms of rabies, they think of aggressive animals foaming at the mouth. This is accurate! Because the brain is affected, abnormal behaviors are frequently seen, and they do tend to salivate more; sometimes change in vocalization is noticed, as well as difficulty swallowing and elevated third eyelids. As the virus continues to attack the brain, more inflammation occurs, and the animal then develops the ‘dumb, paralytic form’ of rabies, where they are slow to respond, appear dazed, and sometimes unable to move. Eventually, the virus attacks the part of the brain that controls breathing, and the animal will die of respiratory arrest. The time between onset of outward physical signs of rabies and death is usually 7 days or less.

How do I prevent my pet from getting rabies?

Rabies is invariably a deadly disease, but it is a PREVENTABLE disease! This is why veterinarians so strongly recommend vaccination, and in many states and countries, it is mandatory by law. The rabies vaccine is administered to puppies and kittens after 12 weeks of age, then once a year or every 3 years, depending on the type of vaccine used. Thankfully, the rabies vaccine comes with very few side effects. On rare occasions, dogs may have an allergic reaction to the vaccine, but this is uncommon, and is very often treatable. If an animal contracts the rabies disease, it is not treatable. And unfortunately, there is no way to test an animal for rabies while they are still alive. The test for rabies involves sending the animal’s brain to a specialized laboratory, where they look for the presence of the virus in the brain.

What happens if my pet is exposed to a potentially rabid animal?

This is where things get a little confusing and next steps depend on state laws. Let’s say your beloved dog, Walter, goes outside, and proudly returns with a skunk as a gift to you, a souvenir from his excursion (how thoughtful!). Is Walter up to date on his rabies vaccine? If so, he’s unlikely to contract the disease, but you may want to contact your vet and see what they advise. Usually, a booster vaccination is recommended, as well as in-home monitoring for 45 days. The skunk can be submitted for testing to determine if it is positive for rabies; be advised that there is usually a fee for this, which varies by lab. Call your veterinarian or local animal control to find out what to do with the skunk. Let’s say Walter was super excited about this skunk, and ate half of it (gross, I know, but we all know a dog that would do this), and the head is nowhere to be found. This means there is no brain tissue to test, and we’ll never know if the skunk was positive for rabies. Again, contact your veterinarian and see how they recommend proceeding.

Now, let’s say your cat, Marbles, (who is always an indoor cat), slips outside, nabs a bat, and she has never had a rabies vaccine because “she never goes outside, and even if she does, it’s just on the patio”. Again, try to test the bat if at all possible. If the bat is not available or testable, it will depend on state laws how things proceed. In most cases, euthanasia and testing is recommended, but we know this is a family member. In some cases, Marbles can be quarantined (‘house arrest’ with minimal to no contact with other animals or people) for monitoring for 4 months to see if she develops any clinical symptoms of rabies. In some states, Marbles has to be quarantined in a designated facility for up to 4 months. If she develops any symptoms of rabies, she must be euthanized and tested for rabies.

If there is ever any question as to whether your pet was exposed to a potentially rabid animal, please contact your veterinarian. It is not necessarily an emergency situation (unless there are wounds that need to be cleaned) but call your veterinarian as soon as possible during normal clinic hours.

What happens if I am exposed to a potentially rabid animal?

Call your physician as soon as possible; do not delay treatments. As stated above, whenever possible, we recommend testing the potentially rabid animal. In some cases, the state’s health department will pay for the testing if a human is suspected to be exposed. If the animal is unavailable for testing, or is confirmed to be rabid, you will need to receive a series of 4 post-exposure vaccines. Many people think of the old vaccines that had to be administered in the stomach and were incredibly painful, however, the vaccines are now administered in the muscle in the upper arm. Do not delay treatment; once the symptoms of rabies develop, the survival rate is nearly zero. Symptoms can include light sensitivity, difficulty swallowing, headaches, fever, hallucinations and insomnia. For those curious, veterinarians and other professionals working with wildlife get prophylactic rabies vaccinations to help protect us against accidental exposure.

What’s the moral of the story?

Rabies is a fatal disease, but it can be prevented by following a few simple steps. Get your pets vaccinated and keep them up to date, even the cats and dogs that never see grass! You never know when Walter or Marbles may slip outside, or a bat may slip inside. If you see an animal acting strangely, leave it alone and call animal control. If you think you or your pet has encountered a rabid animal, please call your veterinarian and/or physician as soon as possible. And please call your veterinarian if you have any questions; we’re here to help!

The Nebraska Department of Health and Human Services has a webpage dedicated to tracking rabies cases in the state each year. To see up to date information, click here. 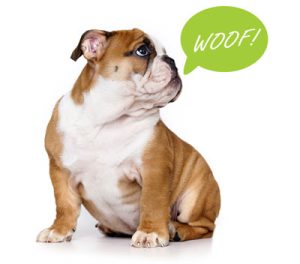